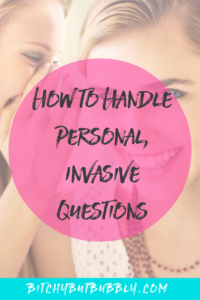 “When are you going to settle down and get married?”

“You’ve been married for a while. Isn’t it time for a little one?”

“It’s too bad about you and your husband. Why did you guys split up?”

For the love of all things good and holy, STOP the madness! By madness, I mean stop asking personal, nosy, invasive questions to people you barely know. Actually, stop asking personal, nosy, invasive questions. Period. I don’t care if you’ve known the person forever. I promise. If they want to talk about it, you’ll know. <Cue NBC’s ‘The More You Know’ music.>

Despite the best of intentions (and I’m giving some of you a LOT of leeway with the BEST of intentions part), these questions can really take a bite out of us. It’s frustrating. It’s annoying. It can be hurtful in many cases. And it often opens up a can of feels that people tend to not want to bring up. Plus, if I had any real idea about the future and direction of my life, I probably wouldn’t spill it in the grocery store parking lot to someone I see twice a year.

We have no idea what’s going on in a person’s life…really. We think we know. But we don’t. There’s so much that goes on behind closed doors that we often presume that who we see is who a person actually is and what we see them struggling with is all they have on their plate.

I’ve thought about it and can come up with three reasons why people ask inappropriate questions:

I’d like to think most people would fall into the “really care about us” group. But let’s break it down.

I am an introvert masquerading as an extrovert. I get it. Conversations can be hard. Small talk is the worst. Can’t we just dig in and talk about real stuff?!?! Absolutely. But keep this in mind: Prying is not a desirable conversation strategy. Neither is invading someone’s privacy, spreading gossip (or attempting to gather gossip), making people feel uncomfortable (Yes – you can tell. PAY ATTENTION!), or hurting feelings.

[Tweet “The best way to get better at conversation if you completely suck at it is listen twice as much as you speak.”]

The best way to get better at conversation if you completely suck at it is listen twice as much as you speak. Think about all you would learn then. Another great tip is to share something personal about yourself. Sure. We get that you’re fine. And we understand that the weather’s been swell. But if you tell me you’re fine and the family is fine and school is fine and then you comment, “I had no idea you are an alcoholic. What was your drink of choice?” We’re probably not going to have a real personal conversation absent the verbal slaying that is likely to come your way.

How should you handle it when someone asks one of the icky questions? My advice: Tell the truth. That may be telling someone who asks why you haven’t had children yet that you’ve had 2 miscarriages in the past year. It may be telling someone that you’re not interested in discussing that subject with them. Do what makes you comfortable…just try not to slap anyone.

For some, gossip is their currency. The more gossip they have on others, they better they feel about themselves. So some are bound and determined to get the goods, i.e., your story. But the key is this: they can’t get the goodies without your consent. If someone asks you a ridiculous, personal question, pump the brakes. Who says you have to respond to a question if you don’t want to? Who even says you have to respond with words?

My go to response with people on the gossip train is this – L A U G H T E R! I laugh. I mean, I really laugh. You’ll often find that the person has no idea why you’re laughing so they’ll nervously look around like, “Crap. Do I have a bat in the cave?” And after a pretty uncomfortable period of time for the gossip girl (or boy), I just say, “You crack me up. See you later!” Don’t be afraid to let someone know that their question is rude or inappropriate or ridiculous. If they’re ballsy enough to ask, be ballsy enough to let them know what’s up.

They really care about us.

As my dad likes to claim, he’s not nosy. He’s just an informed citizen. Mmmmk. Love you. But, sometimes, questions are too muchie for the introverts among us! I’m always surprised at the number of people who will randomly tell my dad the first person they kissed or how they met their spouse. He’s not a digger of “dirt.” He just happens to love talking to people. A lot! I think you can generally tell with a way a person approaches us, whether they’re in it for dirt or in it for us.

If someone really cares about you and inquires of a pretty sensitive topic, I think it’s totally ok to respond in a “Thanks but No Thanks” way. I’ve told people that I appreciated their concern, and if I felt like discussing the topic, I knew I could count on them. And I really meant it.

It’s important for us to remember that we don’t have to respond to these questions if we don’t want to. We have to honor ourselves and not feel obligated to participate in anything that makes us feel uncomfortable. I think if we called out the folks that tend to dig and draw their attention to the uncomfortableness, maybe they wouldn’t do it so much.

So I realize that this has been a bit of a rant today. But, sometimes words just have to be set free into the blogosphere. I am ALL about having real, genuine conversations with people. I am not into uncomfortable interrogations. The best way to get people to open up and get real is to jump in, be brave, and get real with them first. And hopefully, this is a bit of a reminder to us all – whether we’re the asker or the answerer – be mindful and above all, be kind. We’re dealing with people’s hearts.

And in case my advice above was not clear & you just skipped to the bottom, stay away from these topics in grocery store parking lots, church pews, and anywhere that you haven’t been invited to explore by the individual to whom you are speaking: 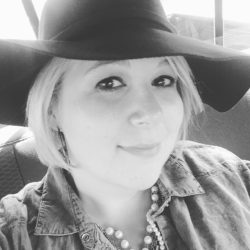 I'm a lawyer, blogger, & confidence diva. Bitchy but Bubbly is all about living the confident, authentic, & fabulous life! My writing has been featured on Huffington Post, Blogher, my Mama's refrigerator, & more. Stay a while & check things out!

The Ted Talk by Jackson Katz is a must listen. Thi

Need this shirt ASAP in an XXL. If it’s one of t

Honestly, I prefer Friday so I have two full days

Gratitude changes everything. 💗 A daily gratitu

Are people secretly going to more rodeos than they

Remember when we sprayed down our groceries before

Damn these damn filters. At 8 o’clock at night,